United Nations Space Command or UNSC for short, is the defensive Branch of the Galactic Republic, established to protect the Republic and its interests. It serves as the United Nations military, exploratory, and scientific agency. The UNSC handles commanding the military and maintaining colonial establishment throughout space and the entire empire. The UNSC's main base is set up within the HALO, meanwhile several million other Orbital stations have been set up throughout the Galaxy. 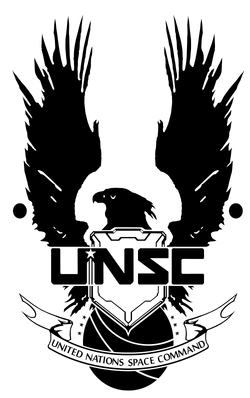 The United Nations Space Command is tasked with overseeing the safe expansion and protection of the Galactic Republic's territories; including all systems, planets and space colonies. The UNSC was created during the Human-Covenant War and is run by the United Nations security council. It's professional head is the UNSC High Command, based on Earth. Control is exercised through regional CENTCOM's, which have responsibility over assigned areas of space. The Navy houses the divisions of UNSC Marine Corps, Office of Naval Intelligence (ONI), and the Fleet. The UNSC Army and UNSC Air Force maintain garrisons on colony worlds.

Unlike the Covenant, UNSC military technology is still based on comparatively primitive, but effective, mechanisms - which include projectile weaponry, wheeled vehicles, and combustion engines. The UNSC's grasp of scientific concepts is far more advanced than the Covenant, but turning these concepts into functional machinery has proven more problematic. Not so for the Covenant.

Retrieved from "https://cosmos.fandom.com/wiki/United_Nations_Space_Command?oldid=4165"
Community content is available under CC-BY-SA unless otherwise noted.