Commander Damian Payne-N259 of the UNSC Special Forces  is the leader of the Noble Squadron, tasked to hunting special targets of the Covenant Empire .

Damian Payne was born in the space colonies outside of Titan. He was selected for the UNSC's super soldier program at the age of eleven. After successfully completeing the program, Carter was inlisted into the Republic NAVY and eventually graduated to the rank of Commander. He was selected especially to lead the Noble Squadron alongside Republic Knight Galen Marek. 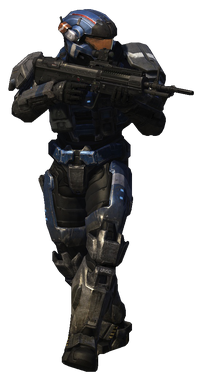 Payne is described as charismatic and reassuring, as well as a born leader, inspiring confidence in those under his command. He is said to be cool under pressure, with laser-like focus, even while maintaining adaptability and flexibility. Carter is also noted as being capable of interacting with non-SPARTAN personnel effectively and efficiently with low-to-no expected stress issues, and is said to be at his best while building a team.

As team commander, his defining trait is his desire to bring his people back alive, but he knows the challenge of losing members of his command. Although a natural born leader, he takes a secondary role to his commanding officer; General Marek.

Payne is a seasoned Trooper, trained through experience on the battlefield. He is one of the most talented field leaders and marksman in all of the Military. He wears custom Powered Assault Armor which increases his strength, speed, agilty and reflexes in battle. Payne usually relys on his Mark 392 Designated Marksman Rifle (DMR) while out on the field. Payne is also a very talented Pilot, especially while piloting in gravity.

Retrieved from "https://cosmos.fandom.com/wiki/Payne-N259?oldid=4051"
Community content is available under CC-BY-SA unless otherwise noted.