The Holy Order of the Cosmos is an ancient monastic peacekeeping organization unified by its belief and observance of Cosmos, an entity known as the living force. Cosmos can be seen as a goddess of harmony that serves as the manifestation of light throughout the universe. The Order of the current age serve as the guardians of peace and justice in the Galactic Republic. Members of the order are able to use the mystical arts of the cosmos, believing that it is the power of light. They're warriors are known as Knights of the Order and they wield blades made of pure energy known as Sol Sabers. 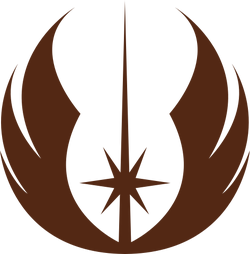 History of the Order[edit | edit source]

It is a common misconception that the Order directly follows the decisions of the United Nations, this is false. The Holy Order is lead by the Council of the Round, a high council created a gathering of great minds that acted as a governing body for the Order, eventually serving as an advisory board for the Office of the Supreme Chancellor following the Order's joining the Republic. So in fact the United Nations more so follows the Holy Order.

The Knights of the Order must follow a process in order for them to be considered able warriors. Members of any speicies or race can become a Knight as long as they are chosen to be sensitive to the mystical force of the Cosmos. In the current age, younglings are taught from a young age to believe in Cosmos and the living forces of the light. They are later promoted to Esquire's who train under an already established Knight. Once they've then completed that training, the Esquire takes on the Cosmic Trails in order to prove they are ready to follow the Code of the Cosmos and fight for the light.

Knights of the Cosmos are very rare, as only ten percent of every race in the universe can become sensitive of the cosmos. This makes the actual number of Knights quite small but there are a select few within those low numbers who are exceptional. These few are known as the Knights of the Round, who are the equivilent to the diplomats on the Council of the Round. These exceptional Knights are ranked from the Knight of One to currently the Knight of Ten.

The Knights of the Order are said to be the most powerful beings in the universe. The ability to command the mystical forces of the Cosmos and the destructive Sol Sabers allows them to combat any force and prevail.

Solsabers are known as the great dividers, swords made of pure energy that can pierce nearly anything in the universe. Due to all the weight being in the hilt, the solsaber was a difficult weapon to handle. Knights need heightened awareness to use the weapon well, and such conditioning helped to hone their connection to the Cosmos. Since the binding of solsaber's intricate innards and the initial charging of the power cell also required knowledge of the Cosmos to implement, the Esquire was tasked with constructing their own lightsaber as part of their training, using a unique crystal, (such as the type found on the ice planet of Ilum, for example), that focuses the crystal's energy thus creating the lightsaber's blade.

Knights of the Cosmos specialize in the use of mysical arts, these arts are said to be the manifestation of cosmic power. The goddess of harmony; Cosmos is said to be within the heart of every living being and she emantates an energy field from. Becoming sensitive to this field is the key to being able to use the power of the cosmos.The Order believes the Living Force of Cosmos could be harnessed through careful study and contemplation to benefit the user and the universe around them. As they studied the , the Order encouraged their members only to use the Force for healing and defense—never in anger or fear.

Knights focus their lives on understanding and strengthening their connection, or oneness, with Cosmos to allow them to manipulate it as an extension of themselves, like Cosmos' hand is guiding them. This connection was increased by rigorous training and meditation to achieve a state of mental, physical, emotional and spiritual harmony, a kind of inner peace. As the path required such great discipline and may have extended a Knight's life, most Knights never reach their true potential. Further attempts to achieve this potential may have met with failure and caused frustration in a Knight, resulting in a lesser connection and more frustration in turn.

Retrieved from "https://cosmos.fandom.com/wiki/Order_of_the_Cosmos?oldid=4119"
Community content is available under CC-BY-SA unless otherwise noted.