The Helio are an Alien Race who hail from the Sanghelio Star System. They are a species of fierce, proud, strong, agile, and intelligent warriors, as well as skilled combat tacticians. Originally a founding member of the unified conglomerate of races known as the Covenant, the Helio act as the main species of infantry soldiers during the current Galactic War with the Republic. 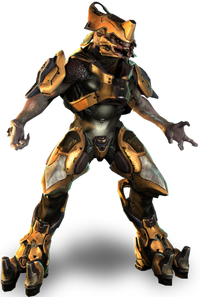 Full grown Helio are generally between 2.2 and 2.6 meters (Roughly 7.4 to 8.6 feet) tall including helmet and armor, have two fingers and two thumbs on each hand which are much larger than human fingers and thumbs, which make the Helio look ungainly when wielding small human weapons such as the pistol. This large, odd appearance has given them the names "Alligator" and "Dino". They look vaguely like lizards, except for their jaws. When wearing armor, they take on a shark-like look because of the "fins" on the sides of their helmets. Their jaws are made up of four separate mandibles attached to their face, similar to those found on the lower jaws of snakes from Earth.

The Helio consider most other species to be inferior to them, both culturally and in fighting skill. Although Helio's are naturally very intelligent, their culture's long dependence on a military-industrial scheme has led to an emphasis on might over science. In some regards, the advent of the Covenant made this position easier, allowing the Helio to concentrate even more mono-manically on military endeavors whilst the Prophets took care of science and technology. Despite this, their adeptness at using and creating technology is evident. It is probable that they designed the Covenant Cruiser themselves.

Raised from childhood to be warriors, other societal roles are treated as secondary endeavors or even hobbies, and are not honored at all. Helio are skilled in the usage of most Covenant weapons. One interesting example of this martial focus is that only aristocrats are allowed to wield swords and that sword-wielders are then no longer eligible for marriage; however, they may breed with any female they choose, married or otherwise, to ensure successful transmission of "swordsman" genes.

In many ways, the Helio are much like humans. They communicate, are loyal to their superiors and comrades, become protective of their troops and become angry and vengeful if others are killed. They fear very little, taking great pride in an ancient, honor-laden code. Even when mortally wounded, the Helio still charge towards the enemy in a doomed last minute attack. Helio honor also dictates that they always be the first ones into a battle, and to never allow themselves to be captured alive.

Retrieved from "https://cosmos.fandom.com/wiki/Helio?oldid=4116"
Community content is available under CC-BY-SA unless otherwise noted.