Dark Knights are the unofficially titled warriors of the Covenant who have been exiled from the Holy Order of the Cosmos. They now serve a false deity known as Chaos, who resides within the heart of the Black Sun; Apokolips. 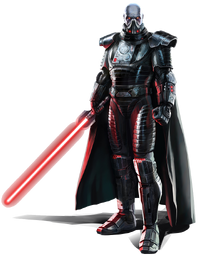 Once the Order of the Cosmos aligned themselves with Galatic Republic. Several Knights within the Order were exiled for Uprising agains the alliance. These Knights were cast out into the outer stars of the Galaxy but were brought back together by a deity known only as Chaos. They gathered on the Black Sun; Apokolips and allied themselves with the Covenant Empire to form a sindicate known as the Sepratists who protest the Galactic Alliance in its entirety.

The Dark Knights became the main fighting force of the Sepratists alongside the Helio soldiers. They cast aside the beliefs of Cosmos and took on a new, darker life style. Their fierce hatred of the Cosmos ensures they will fight at the forefrunt of any battle. Due to their passionate dedication to their goals, Dark Knights are natural leaders, inspiring both fear and undying loyalty amongst their allies. While they have little patience for failure, Warriors understand the need for strength in numbers against their foes.

The Dark Knights who stand above the rest, and display true power beyond savagery are titled with "Darth". This represents the darkness that comes from Chaos' himself.

As far as their armament goes, Dark Knights typical wielded standard solsabers. However, in keeping with their pragmatic mindset, their solsabers often featured more technical, squared-off designs, especially in comparisons to the more rounded Cosmic lightsabers. However, as their Solsabers draw their power from a dark sun, their blades are a dark red color. A Dark Knight's entire equipage is geared towards forcing opponents onto the defensive, Dark Knights have been known to favor more unorthodox soltsaber disciplines.

Retrieved from "https://cosmos.fandom.com/wiki/Dark_Knight?oldid=4114"
Community content is available under CC-BY-SA unless otherwise noted.